I was in a mood today. The mood that is more and more frequent and that is the mood that got me looking into whatever all this is. Vanlife, vandwelling, extended road trips forever, part-timing, full-timing. I guess it’s a fundamental restlessness I’ve always had but some days it feels so…activated.

The mood made me want to spend some time (time I should have been working) messing around with bed configurations in my minivan, to feel more ready for more travel. The weather here has been incredibly mild and it’s almost warm enough at night right now to go camping. Anyway, I tried putting one of my Coleman cots in the van, because the idea of being able to use that under-the-bed space for bins of stuff is very appealing. Minivan space is limited.

The cot technically “fits” but this particular cot is just all wrong. It’s the kind that always wants to fold up unless you are actually laying (lying?) on it, and that makes getting off and on it even more awkward than it already is based only on its side. Still good for inside a tent or as a guest bedlike thing in the condo, but not for sleeping in the van.

This was all very aggravating. I’m not naturally good at organizing space, and the few times I’ve taken my van out so far it immediately gets cluttered, and that frustrates me, and I’m spending a ton of time and energy moving stuff around and looking for it…I don’t want to be dealing with a cot that constantly threatens to collapse.

So I went back to my “bed on the floor” approach. The minivan floor, when the seats are stowed, is uneven and has these horrible metal rings sticking out of it. You don’t want to accidentally crawl over one of those on your knees. I’ve done it and it hurts REAL BAD.

A combo of a packing blanket, a thin inflatable camping mattress, and a 3-inch memory foam mattress more or less solves this problem. It still needs a thin pillow or similar where the floor really dips.

Ultimately I think I will want a better solution. We’ll see.

The bed takes up half the space in the back of the van, and as I say, I hate the cluttered feeling. I decided I needed some sort of cargo box for all the stuff that takes up space, stuff that is useful or necessary but not fragile or expensive. Stuff like camp chair(s), roll up table, sneakers and flip-flops, towels, extra bedding, tarps and poles, hammock, that sort of stuff.

I’ve done tons of research for the last year on all sorts: hitch racks with boxes, swing-away hitch boxes, rooftop bags and racks, rocket boxes. I think the swing-away hitch boxes are great (this is an old video but you see what I mean). I love that you don’t have to reach and climb to get to the stuff, and the boxes can kind of double as cooking tables or whatever kind of surface you need.

But, I live in a condo and do not have a garage and therefore want something I can kind of leave on most of the time, and have no desire at all to make my minivan longer. The joy of the minivan is it can fit into any normal parking spot and basically act like a normal car. And those swing-aways ain’t cheap. They cost enough to make a rocket box actually seem like a decent deal.

All of this research was getting me to Threat Level TMI. A little googling and I actually found a place right in my town whose entire business is about selling hitch racks, cargo boxes, bike racks, ski racks, etc. I drove my butt to the place, and the guys were nice, and I looked at used and new stuff, and found a deal. And now I have a cargo box! If and when I do need or want to take it off, it will not be a big deal to get it into our condo storage unit or even stick in a friend’s garage if necessary.

I am…not tall…and I might end up moving it more to one side or the other vs having it right in the middle, but first I’ll see if a little cheapo plastic folding footstool will do the trick for accessing it. Such a thing could also be handy as an extra little seat for a camp site. Today I put some stuff in by standing on my van floor with the sliding door open, but that felt a little precarious.

If I ever go fulltime in some other sort of van, I think I would invest in the swingaway hitch system, and hook up the lights and move my license plate and the whole deal. Oh, and speaking of investing a small fortune, the place where I got the box had one of those roof tents set up and man those are AWESOME. I’ve seen lots of pictures of them online and always thought they looked goofy and unstable but this thing was sturdy as could be an the bed was unbelievably comfortable.

Honestly, it would solve the problem of how to comfortably travel in the minivan with my spouse, because you wouldn’t need any of the space inside the van for the bed, nor a tent, nor cots. Again I have the storage problem because I can’t imagine leaving it up on the van all four seasons, and it is big and heavy and somewhat more of an ordeal to set up. But being up on the roof (and maybe more safely away from snakes and spiders?), comfortably looking at the stars, and having all that space still left inside the van…sounds like a dream. Maybe some day!

(As a side note: I look this post over and these pictures and think about how far I am from what I see on Instagram and in videos. I mean, look at my janky-ass attempts at setting up a cot! Everyone online seems to know wtf they are doing. And this combination of being so restless but also feeling so incapable is frustrating, and what I am trying to get over. I keep reminding myself that even if I have nothing more than a sleeping pad and some food and water, I can take short trips. This is not about being the most prepared or looking the best doing it! It’s the doing it part that counts. Everything else is meaningless if there is not that.) 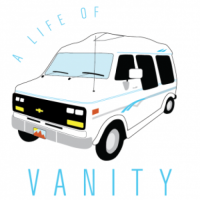 Aspiring to the FTRV Retirement Life

rvsue and her canine crew

For anyone who has ever thought of attempting the #vanlife, A Life of VANity is an unfiltered, realistic look at the unglamorous day-to-day happenings of life in a Chevy G20 Conversion van. Unlike other #vanlife blogs, A Life of VANity is here to show you that it isn’t all roadtrips and ocean-side views, and that there’s nothing wrong with living in a backyard or two.